Foothill-Sierra Pest Control was faced with excluding a large population of pigeons roosting between two historic buildings in downtown Sonora. We did not want to risk piercing the walls or roofs of these buildings. The first prototype, created and built by Jim Tassano, with Kraig Stewart’s help, worked well. The job was then taken up by our vertebrate specialist, David Adragna, who designed and built, with Bill Breidenstein, a strong, long-lasting, modular version of the prototype.

No hardware penetrated the roof or walls of either building.

The pigeon poop was the breeding site for lesser house flies, which had become a noticeable nuisance in downtown Sonora, even warranting stories in the Union Democrat newspaper.

The pigeons have moved on, and the flies are gone. 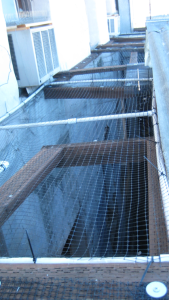 Pigeon exclusion without any structural modifications 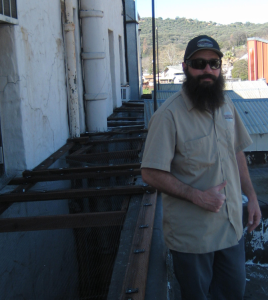 David Adragna of Foothill-Sierra Pest Control with his modular pigeon exclusion setup, installed without any structural modifications to the buildings. 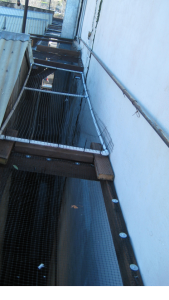 Pigeon exclusion without any structural modifications, had to vary as the nature of the buildings changed along their lengths. 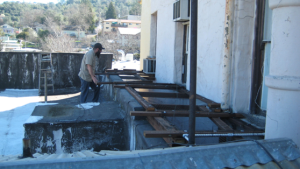 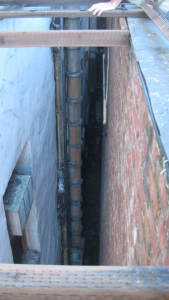 Looking into the chasm between the buildings, through an opening in the modular pigeon exclusion setup.