Ryles Richards, service technician for FSPC, spotted an unusual cluster of tiny, corkscrew-shaped sand/mud constructed spherical things attached to the side of a shed in Avery, California, early April 2018. He took photos, collected specimens, and did the application.

We shared the information with the Calaveras and Tuolumne County Ag departments, Scott Oneto of Cooperative Extension, and Dr. Lynn Kimsey of the UC Davis Bohart Museum of Entomology. Snailcase bagworms were new to everyone, and Ryles’ discovery is apparently the first report of this insect species in our area.

Snailcase Bagworms have been previously reported from Nevada and Plumas Counties

The literature shows that the first ever report of snailcase bagworms actually came from a private residence, in Nevada City, California, in June 1940. Despite this, the only recent records that we can find are from nearby Plumas County. The snailcase bagworm has been reported in several other western states. There are east coast populations, and they are believed to have originated as independent introductions from Europe. 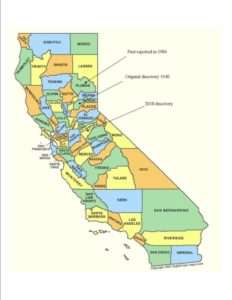 Here is a link to a video showing snailcase bagworms crawling, in Plumas County, 2012: https://www.youtube.com/watch?v=AI99J8fi63k

So the snailcase bagworm has been in Plumas County since at least 1984.

Searching Bugguide.net, the only specimens submitted for ID of snailcase bagworms from California are from Plumas county (2012) and Calaveras County (the ones we submitted in 2018)

Snailcase bagworms must be widespread in Calaveras County

As the story developed, it turns out that this house was rented, this last winter, by a guy who moved here from Alabama. So our first suspicion was that the snailcase bagworms hitchhiked here. We contacted  the chief entomologist at Auburn University in Alabama, Charles Ray, and he tells us that they have never seen snailcase bagworms in Alabama. So any theory that the tenant imported these insects here cannot be true.

The place is remote, and there are no neighbors. A video, below, shows the location. The building that had the snailcase bagworms has no ornamental plants around it. And there was nothing to suggest a vehicle drove to the shed, or parked near the infested area, or that any furniture, boxes or anything at all had been stored out there. The shed did not contain any furniture or plants, or anything that would hint of being a  source. It also did not contain anything that belonged to the tenant. There were maybe 100-200 of the larval cases on the pumphouse, mostly on one corner, going from the ground up to the eaves. That is a lot of bugs, and since this was early April, these insects must have been here from the previous year (also well before the tenant moved here). We checked with the property management company, and the previous tenant was the owner of the property, so any argument that this pest was carried into the area is invalid.

The logical conclusion is that the snailcase bagworm is established in Calaveras County, and this was simply the first sighting.  If so, they are likely out there, in other locations. Among the numerous plants they can feed on is ponderosa pines. FPC technician Paul Cooper checked the nearby pines, but did not see any sign of snailcase bagworms on them. But the bagworms were mostly on the west-facing part of the shed, and there were no pines on that side. Some other, herbaceous plant, must be the preferred food.

On 13 April 2018, we retreated the pumphouse exterior, and surrounding grounds, to help increase the chance that we have eradicated this population of snailcase bagworms. The ones attached to the structure appeared to be dead, possibly from the treatment that Ryles Richards performed a week earlier. Paul Cooper retreated the shed, inside and outside, including the surrounding ground area, a few days later.

Snailcase bagworms are reported to damage a number of crops (see the host list, below). On homes and other structures, they become a visual nuisance when the crawl up onto, and attach to, the siding and eaves (as we first found them, and you can see in the photos below). These cases are difficult to remove. There are reports that they can stick so well that you can pull the paint off a wall when you remove the case. We had a tough time getting them off. A webster only gets down a minor percentage. Spraying water on the cases seemed to help.

This table is from the Washington State Extension bulletin on snailcase bagworms:

In addition to that list, the Wheeler and Hoebeke paper lists ‘chrysanthemums and other plants grown for cut flowers’, barley, olive, ‘many range plants’, corn, sweet clover, and strawberry. In addition the cases have been found attached to planted flowers and vegetables, ornamentals and shade trees. Cases on plants intended for sale and transport will not be allowed into commerce.

The list of weed plants that snailcase bagworms infest is rather large, and includes, in addition to those in Table 1: foxtail, mugwort, black mustard, common mullein, cinqufoil, black medic, and toadflax.

Some plants they avoid, and do not appear to like: bindweed, lambsquarter, chicory, horseweed, and Queen Ann’s lace.

I want to thank Ryles Richards for making the discovery, documenting their presence, collecting the samples, and doing the control treatment; Paul Cooper and Cory Runyan for doing the follow-up applications to help insure the eradication of this particular population; Jamie S. Creamer and Charles Ray, entomologists from Alabama; an apology to the tenant of the property, who got stressed when we first speculated that the infestation was a result of an introduction from Alabama: it wasn’t; the bugs were already here, undetected until we found them at his house; and to Ken Wolgemuth, who made the initial identification. Thanks also to Dr. Lynn Kimsey, Paul Rainey, Catherine Talbot and Scott Oneto for useful discussions.

Please keep an eye out for these pests, and let us or the county ag office know if you think you might have them. It looks like we will be seeing more snailcase bagworms in other areas in the Mother Lode soon. They are here. As Lynn Kimsey said, the snailcase bagworm is out of the bag.

Links to articles on the biology of snailcase bagworms

This is probably the definitive article on snailcase bagworms in United States:

“This insect reproduces parthenogenetically (no males); is wingless in all stages, including the adult; and spends its entire existence within its case, which it constructs using silk, soil particles, and fecal matter.

The young caterpillars survive the winter within the case of the mother insect. In mid-spring, they drop to the ground on silken threads, construct C-shaped cases around themselves, and begin to feed on many different native and cultivated plants. The feeding damage appears as small excavated areas on the leaf surface, but it seldom results in serious injury.

The bagworm case expands in a helical or coil-spring fashion as the larva grows. The completed bagworm case typically has three whorls or coils and is approximately 4 mm in diameter. When it reaches maturity around the first week of July, the larva, carrying its case, will climb any available tree, shrub, fence, building, or vehicle; attach itself to the surface with silk; and pupate within the case. In August, the adult emerges, lays eggs in the case, and then crawls out of the case to die. The first-instar larvae hatch in late summer and, as previously noted, remain within their mother’s case throughout the winter.” 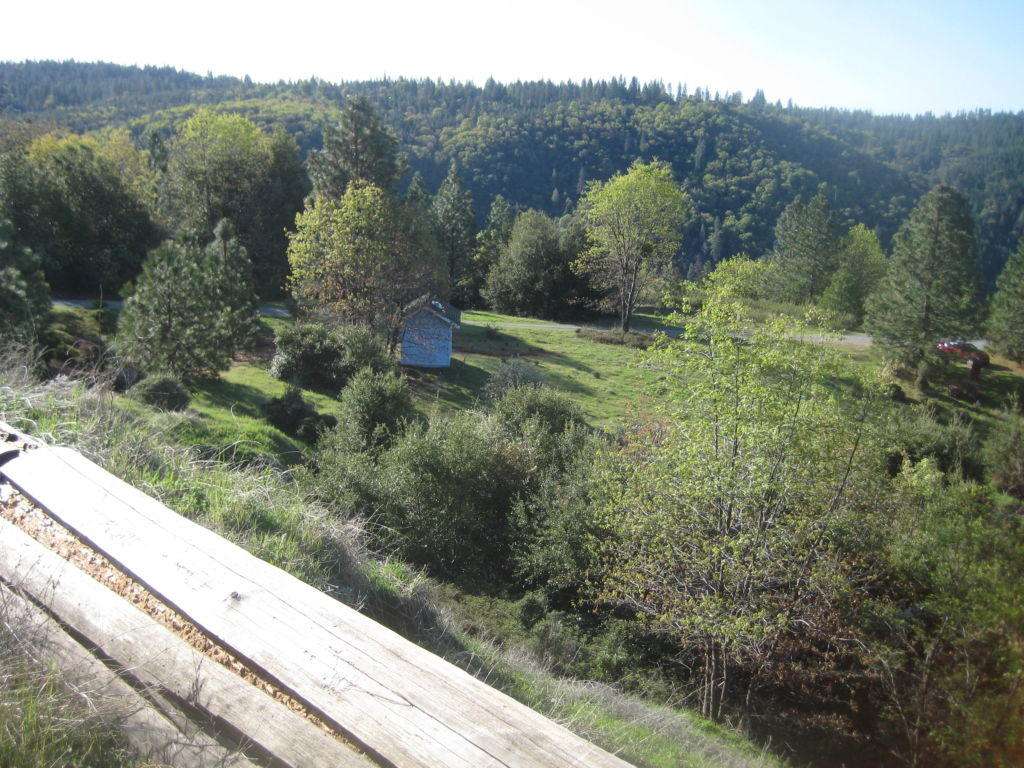 The blue shed, to left, is the building that had the snailcase bagworm larvae. This image should show how remote this location is; there are no neighbors. 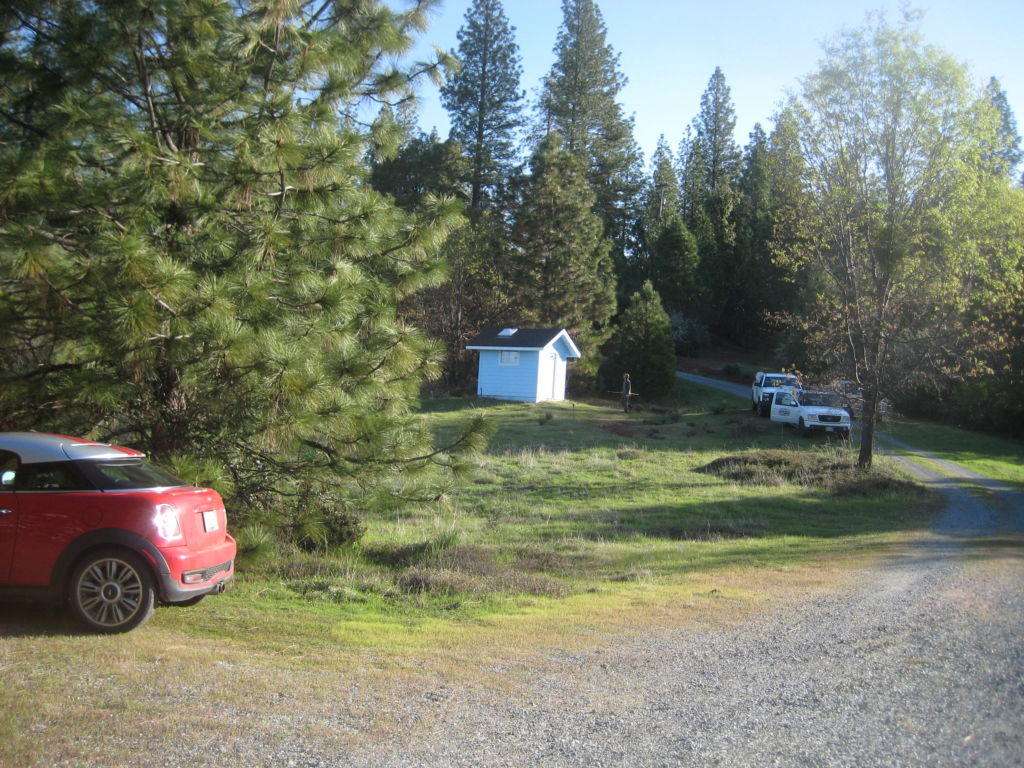 The blue shed, as viewed from the residence. It is a stand alone building, a pump house. 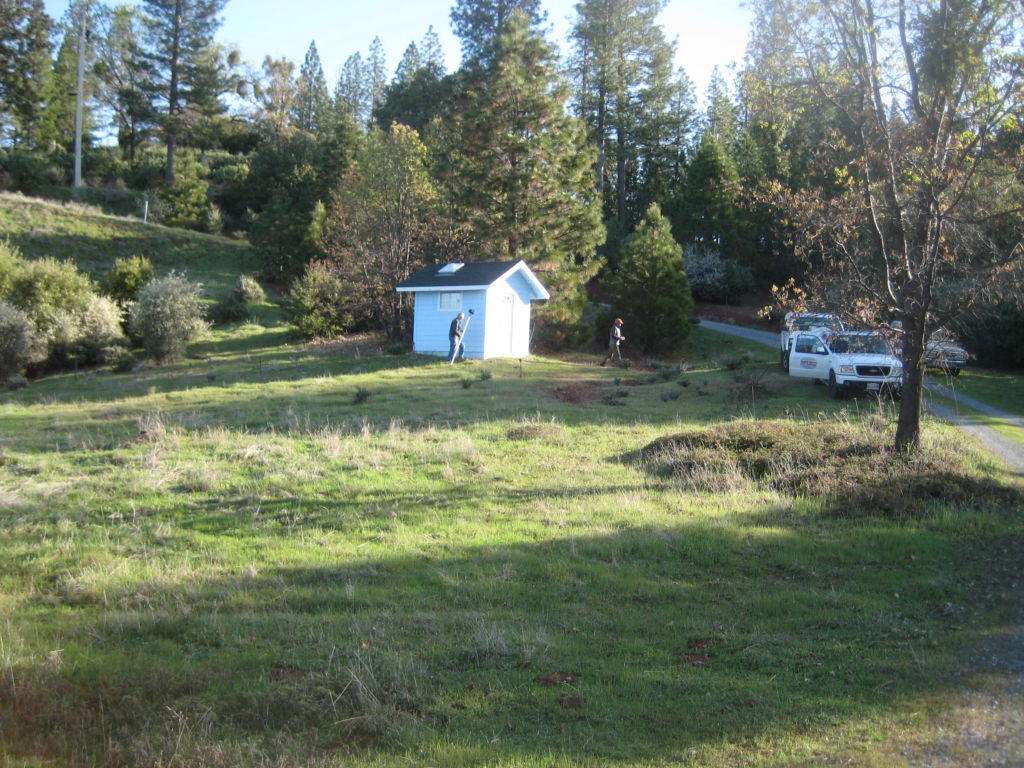 The pumphouse has no ornamental plants near it; it is just there, so to speak. The image shows Paul Cooper and Cory Runyan, collecting samples and trying to knock off some of the attached snailcase bagworm larval cases. 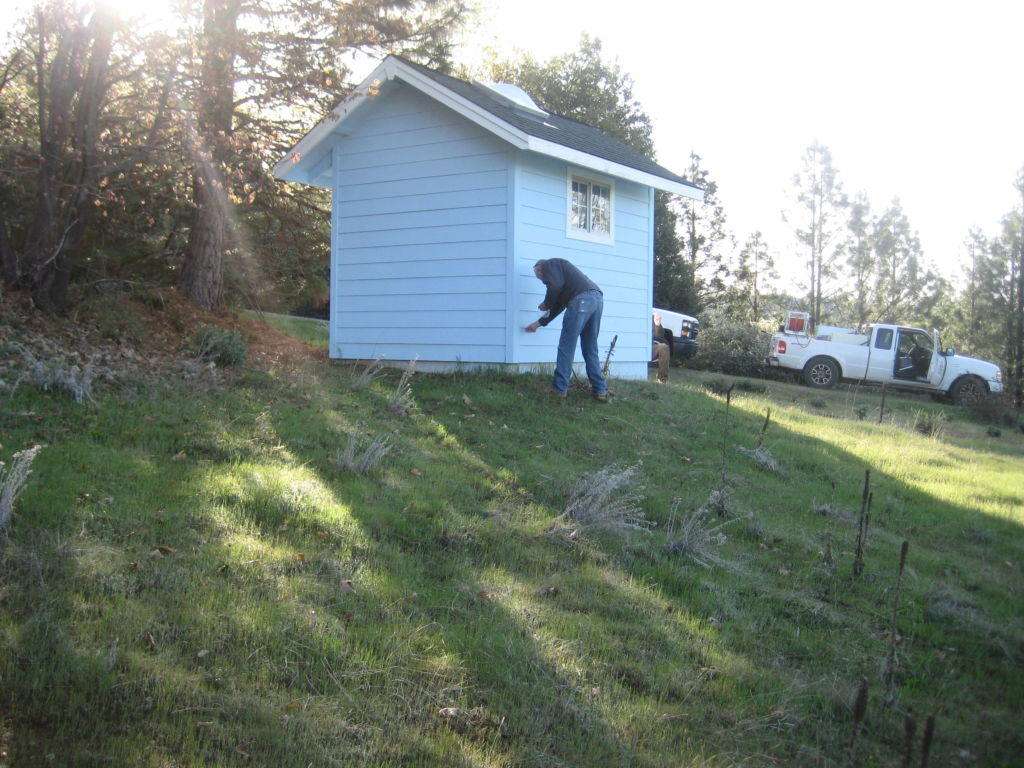 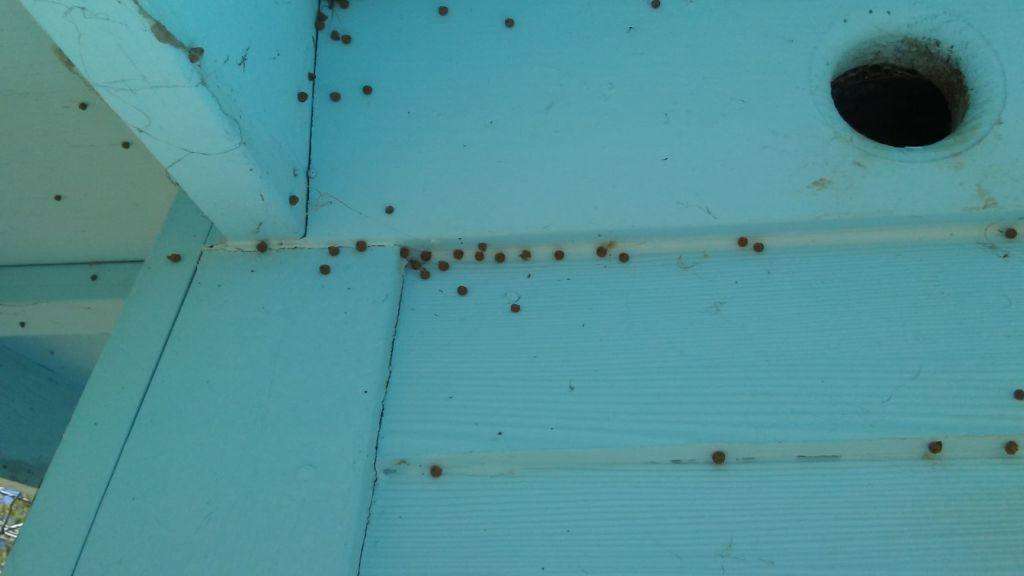 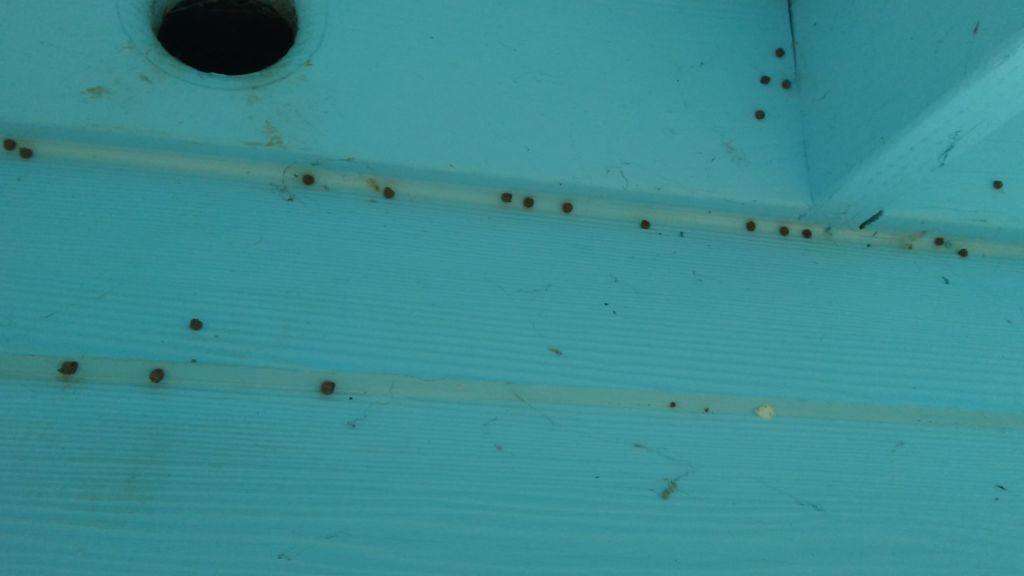 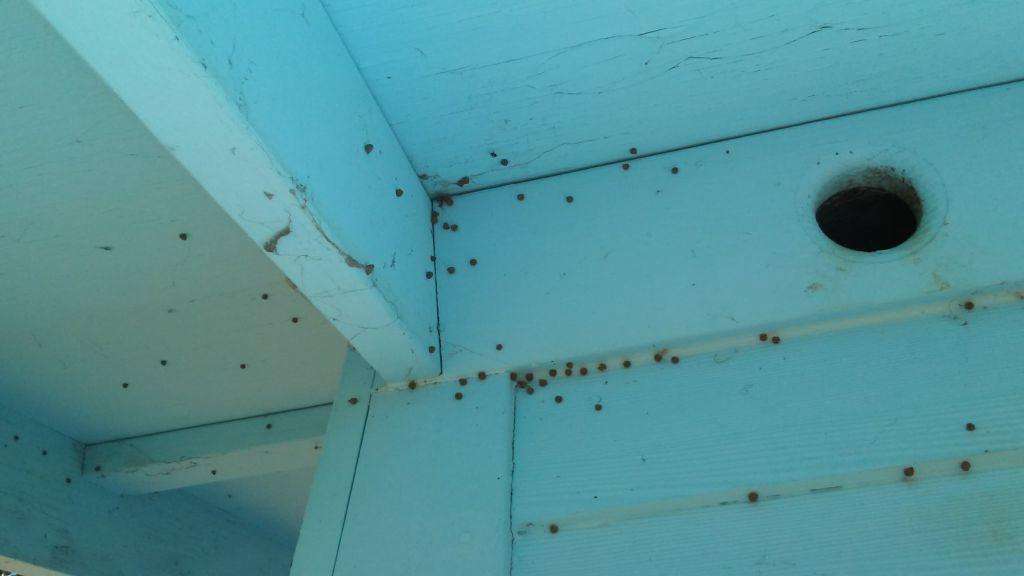 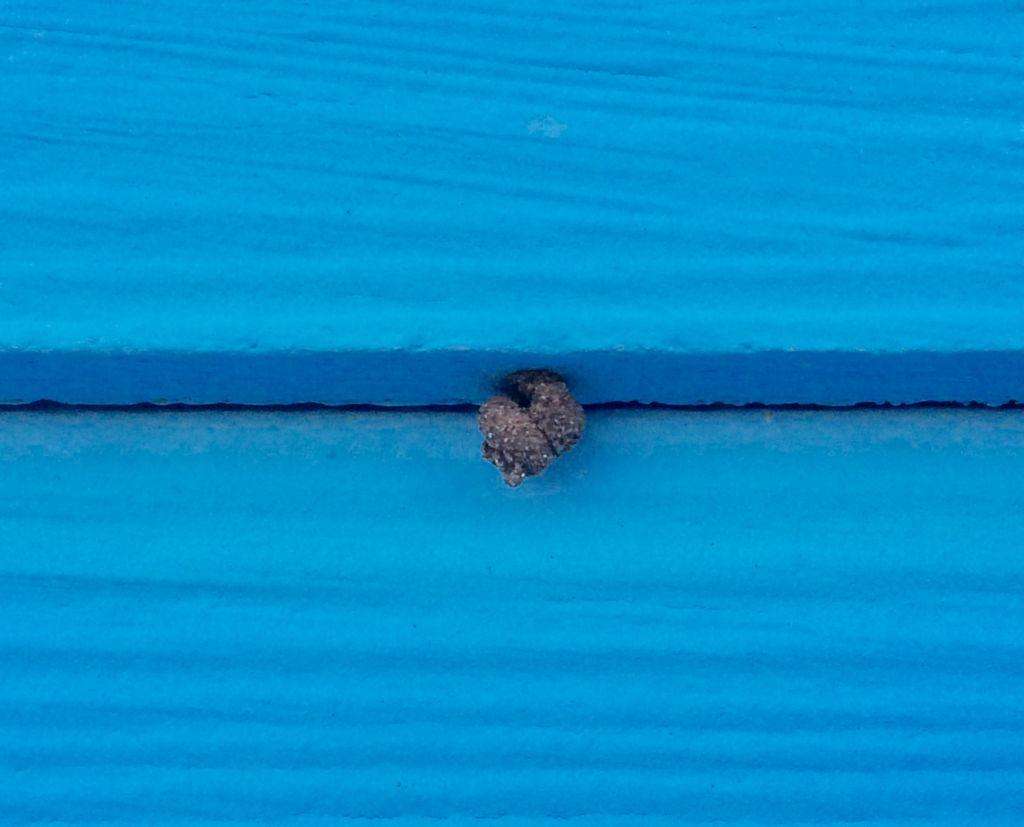 Closeup of an attached snailcase bagworm. Photo by Paul Cooper. 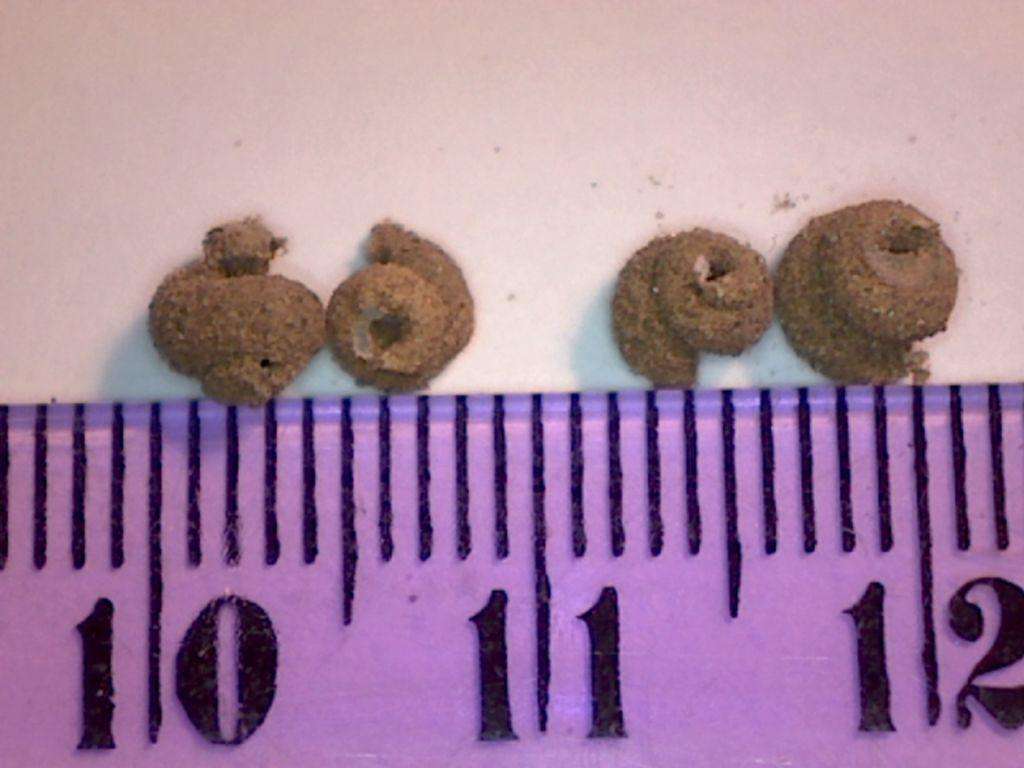 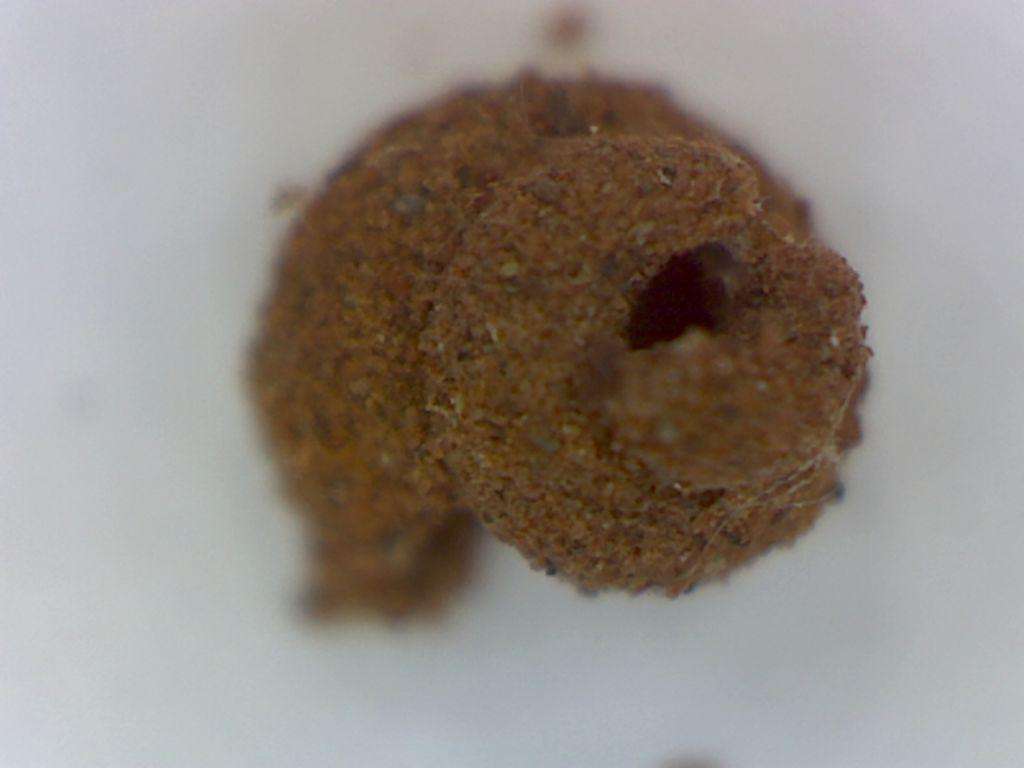 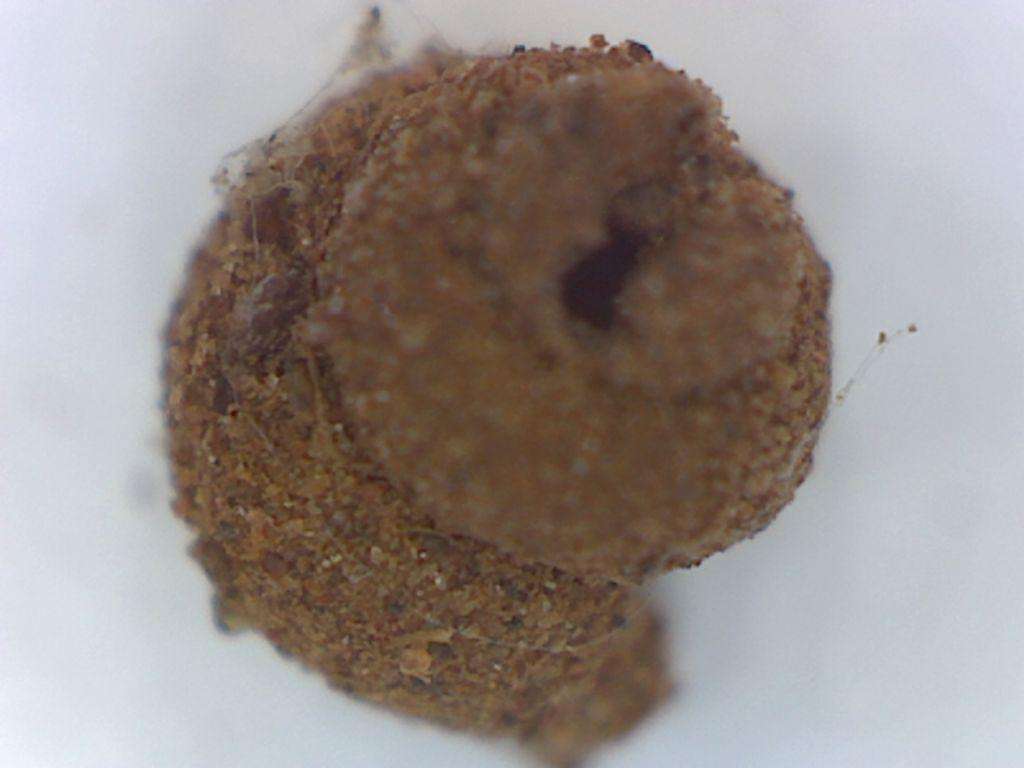 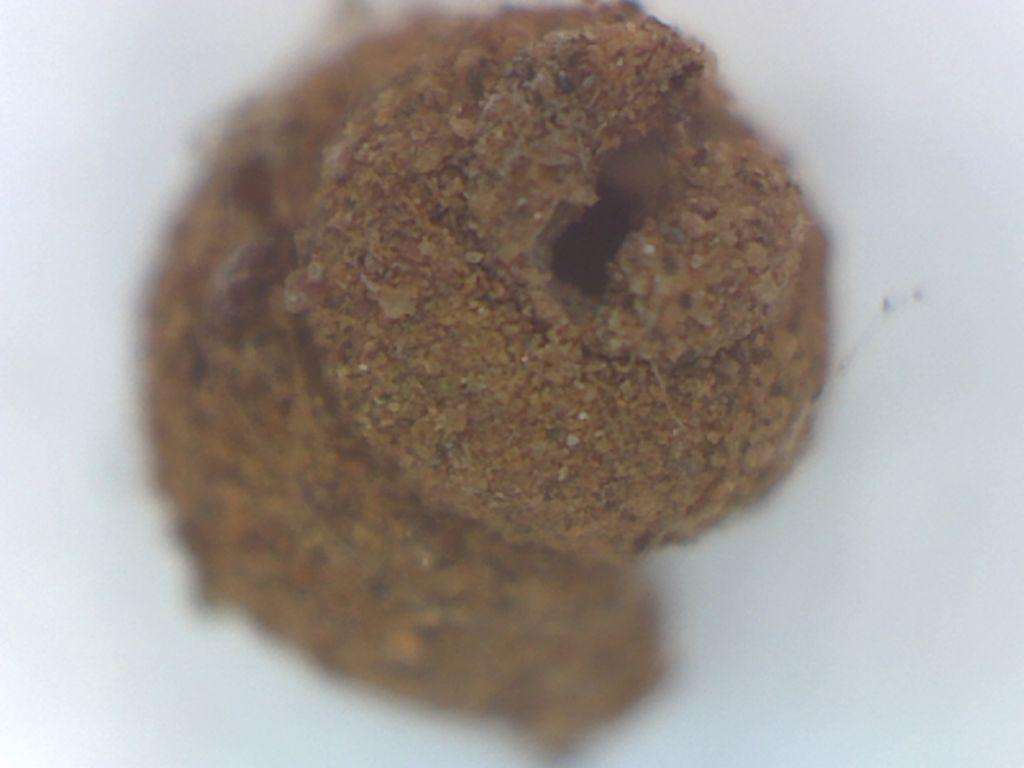 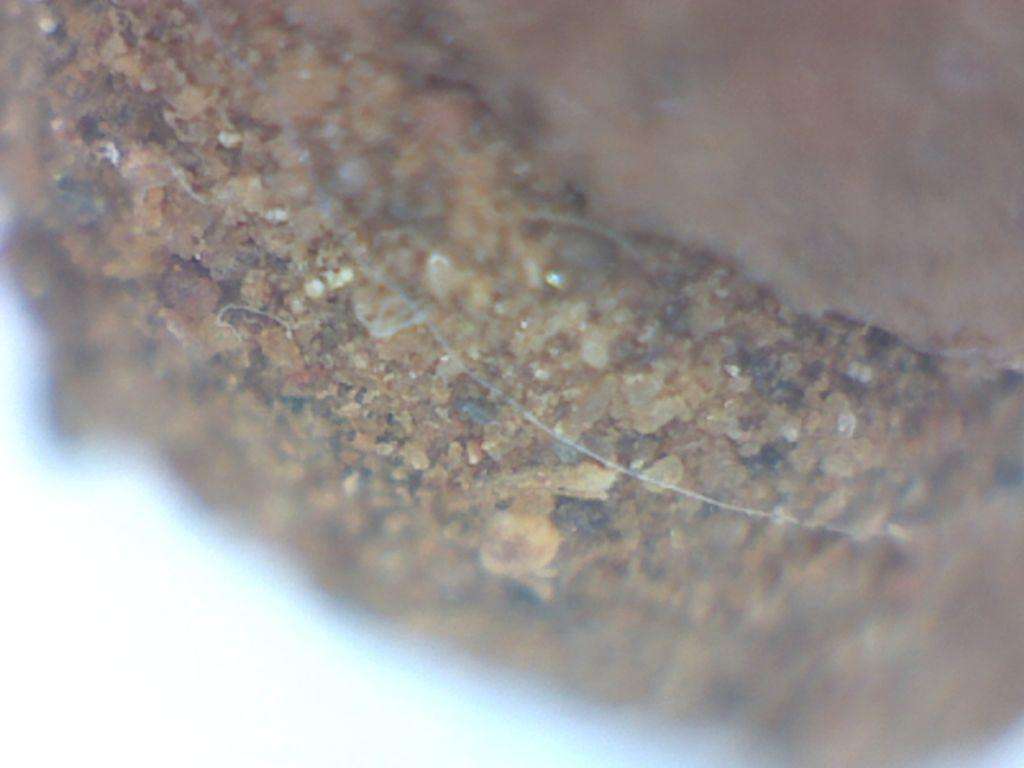 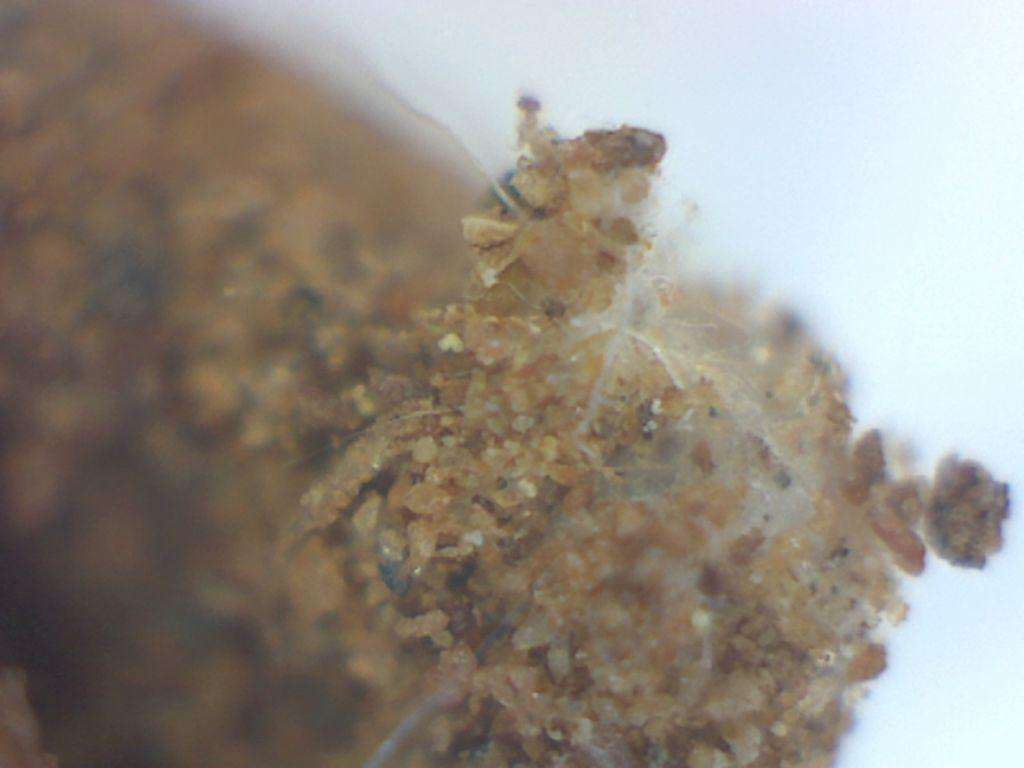 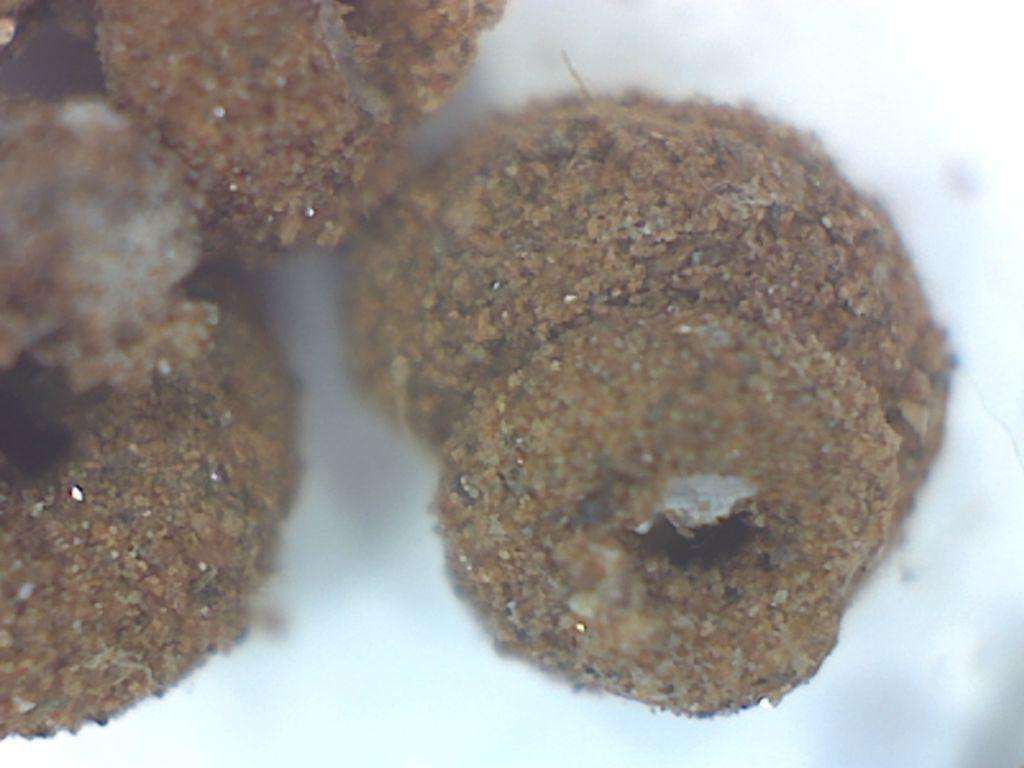 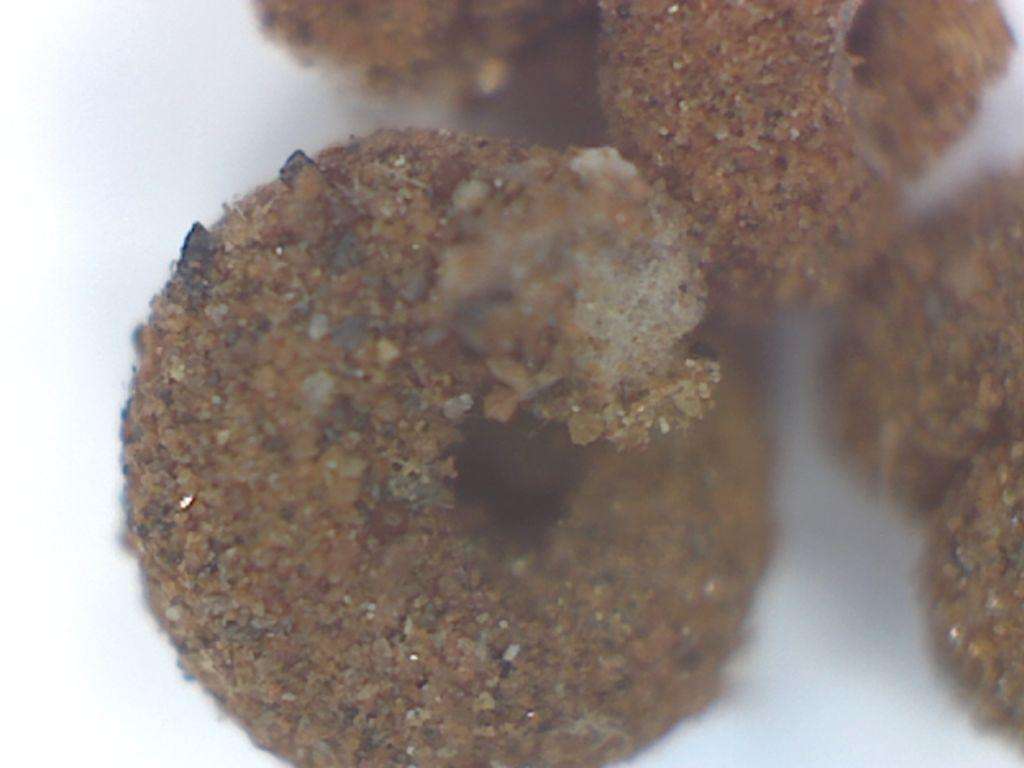 Roof rat eating a pumpkin, and then running off with rat bait

Bat removed from within a house in Burson, California