We get lots of questions about pine bark beetle control. So here is a bark beetle treatment FAQ

Q. What treatment options are available?

A. Spraying and injection.

Q. What is the spraying procedure?

A. We use hydraulic sprayers and follow the standard procedure used in the published research. See Advances in Insecticide Tools and Tactics for Protecting Conifers from Bark Beetle Attack in the Western United States” page 46. A modified quote from that paper: “Topical applications to protect trees from bark beetle species such as western pine beetle, Dendroctonus brevicomis …  are applied with ground-based sprayers at high pressure [e.g., ≥325 psi)] to the tree bole. Insecticides are applied on all bole surfaces up to a height of ~34-50 feet until runoff generally from the root collar to mid-crown.”

Q. What is the best material to spray on a pine tree?

A. It is probably carbaryl, as it gave two field season control of bark beetles. See “Effectiveness of Bifenthrin (Onyx) and Carbaryl…“. However, carbaryl is a restricted material, requiring a permit, and the Agricultural Commissioner may choose to not issue the permit. So we use pyrethroids.

Q. What pyrethroids are used?

A. Permethrin and bifenthrin are the most commonly used pyrethroids. If you read the “Advances paper”  you will see they also tested Asana and Tempo, but neither material is registered for this use.

Q. How often should the pines be sprayed?

A. The research papers report variable results, but in general, both permethrin and bifenthrin gave one-season control. The residual lives are similar for both permethrin and bifenthrin (see these references: X,Y,Z). The chemicals can break down or dissipate due to photodegradation (sunlight), microbial activity, oxygen, and moisture. The “Advances” paper  referenced a study  in which 0.2% and 0.4% permethrin provided control for four months against western pine beetle attack on ponderosa pines. This falls in line with the residual life data.

There are two to four generations of western pine beetles per year (source). This means the spray should be ‘fresh’ for the whole season.

So to answer this question, we suggest a minimum of one time per year. In consideration of the high risk the trees are facing, the relatively short life span of the pyrethroids, and that multiple generations of beetles are produced in a year, we offer a twice-a-year spray program, roughly spring/summer and summer/fall, in an effort to keep the defense active.

Q. Which pines should be sprayed?

A. If the pine is dead, it is too late. Pine trees that are fading are going to die; fading is considered an irreversible sign of impending mortality You cannot save them. Trees that are under mass attack are probably going to die too. For a good description of a mass attack, see  http://www.barkbeetles.org/spb/idbspbb/IDBLCB.html. If the trees are looking good, then get them sprayed, as you cannot wait until they start to die or show signs of attack.

Q. How effective is spraying?

A. It is not 100 percent. Sprayed trees can still die from beetle attack. Sometimes they simply die from lack of water. If you look at Table 5 in the “Advances” paper, (shown below) you will some data. Mortality of treated trees ran from 8 to 12 percent, versus 70 percent for untreated trees. And if you read further, and more papers, you will see that sometimes reported mortality was much higher, as that was how researchers could tell if a particular treatment regime worked or not. So there is no guarantee that spraying will save your trees, as there are many variables at work.

Pine tree mortality with and without spraying.

Q. What about injection?

A. We are set up to do Tree-Age injections , using  Emamectin Benzoate. It is slow to do, and very costly, with typical market pricing coming in at $12 plus per diameter inch. A two foot diameter pine, being 24 inches in diameter, would cost, maybe, $288.00, and that is for one relatively small pine. If you look at tables 2, 3, and 4 in “Effectiveness of Two Systemic Insecticides for Protecting Western Conifers from Mortality Due to Bark Beetle Attack” you will see that mortality rates are all over the map, sometimes approaching 100 percent. Our staff has seen the results of some injection jobs done by other companies that had 100 percent mortality. If you don’t mind spending thousands of dollars and seeing the trees die, injection is for you.

Q. What about Splat-Verb, the anti-aggregation pheromone?

A.  It does not work against western pine beetles, and is highly variable against mountain pine beetles. See our blog on this, where we discuss the issue in detail.

Q. What about watering the pines?

A.  Water them if you can. There is no published research on the effects of watering, but it makes a lot of sense. If you can afford it, and there are no restrictions on water use, consider watering the pines. The anecdotal reports we are hearing confirm the value of watering your trees. Remember that it is good sap flow that allows a pine tree to ‘pitch out’ the invading beetles. Without water, the tree cannot do this.

Q. What about beetle attacks near the base of the pine tree? What is that?

Q. What about cedar trees? They are dying too. What can I do?

A. Water, and maybe, prune them.

The cedars are dying, apparently, simply because of lack of water, not beetle attack. According to Situation Summary of recent tree mortality on Sequoia National Forest, July 2015,  “The sudden widespread mortality in incense cedar is more attributable to the severity of the drought rather than to native pests. All sizes of incense cedar are observed to be fading in Sequoia National Forest. There is no known primary bark beetle or other insect that mass-attack incense cedar. Phloeosinus sp. (=cedar bark beetles) beetles are found in small branches and stems, and woodborer galleries are etched only in a few places on dead trees.” Phloeosinus is also called the cedar, or cypress, bark beetle.

Additionally, “Cedars (Thuja) are attacked by almost no other bark beetles, so any species found working on the inner bark of cedar-like trees (not Cedrus) is almost certain to be a species of Phloeosinus. “(source)

With that said, the drought changes the game. According to Cedar and Redwood Bark Beetles in Southwest Oregon  “The insects are generally present in moderate numbers that pose no significant threat to healthy trees. However, trees that experience recurring drought stress or other forms of stress (such as changes in water table, soil compaction from construction or livestock, intense vegetative competition, etc.) may become weaken and susceptible to high levels of infestation. Under prolonged stress conditions, bark beetle populations may build to the point where the insects are able to overwhelm otherwise healthy trees.”

Jim Goodrich of Groveland reports (14 July 2016) that his cedars were dying from the bottom up, and that examination of limbs revealed numerous white spots on the branches. He pruned the infected branches and then sprayed the trees. One cedar was half dead. The cedars are now all flourishing. 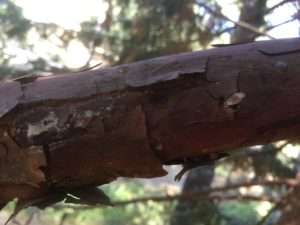 If you have more questions, call or email us.