18 October 2016:  The identification of Foamy Bark Canker is confirmed. Scott Oneto told us that the Escalen Lab reports that both samples he took at the Greenhorn Creek site were foamy bark canker.

Initial report 9/22/16. Customer in Greenhorn Creek shows Paul Cooper the trees. Paul, having 15 years of experience in landscaping and another 14 in pest control, knew this was special, and took photos.

Basic biology A look at foamy bark canker, a new oak disease in our area of the Sierra Nevadas.

A live oak near the Greenhorn Creek gold course that is nearly dead due to an infection from foamy bark canker.

A video of the infestation, taken 28 September 2016 at Greenhorn Creek

Photos showing the changing look of the foam, 7 October 2016.

Video showing the changing look of the foam, 7 October 2016.

How fast did the golf course tree fade?

Video of the foam being emitted from beetle entry holes 29 October 2016.

Retrieval of a western bark beetle from a canker 29 October 2016.

On 22 September 2016, our technician, Paul Cooper, was asked by a customer about some peculiar looking interior live oak trees on her property in the  area of Greenhorn Creek, Angels Camp. Paul took photos, pasted below. The owner of the property tells us that 4 trees are infected, and that she only noticed the problem in the last few days. Paul Cooper then returned and looked more, and spotted a dead live oak down the street from the first reported infected trees, that still showed signs of attack from foamy bark canker.

I sent the original set of images to Greta Shutler of the Tuolumne County Agricultural Department, who identified the ailment as possible Foamy Bark Canker. And it sure looks like it. See also: Pest Alert

This appears to be a range extension of the disease, as it has not yet been recorded in our area. Greta says foamy bark canker was discovered in El Dorado County, but this finding is new to Calaveras County. This disease was first reported in 2012, and published in September 2014, in a paper titled: “First Report of Geosmithia pallida Causing Foamy Bark Canker, a New Disease on Coast Live Oak (Quercus agrifolia), in Association with Pseudopityophthorus pubipennis in California“. Now it is in our area of the Sierras, and infecting interior live oaks, the same type of oak that that it is infecting in El Dorado county. In the following image, I added the new find to the distribution map from “Foamy Bark Canker A New Insect-Disease Complex on Coast Live Oak in California Caused by Western Oak Bark Beetle and Geosmithia sp.” This paper is an excellent resource and has many helpful photographs.

The disease is vectored by the western oak bark beetle, Pseudopityophthorus pubipennis. This distribution map is from A Field Guide to Insects and Diseases of California Oaks by Tedmund J. Swiecki and Elizabeth A. Bernhardt.

This is a description of the biology of pseudopityophthorus pubipennis from Swiecki and Bernhardt’s Field Guide to Insects and Diseases of California Oaks: “Adults bore through the bark to the interface with the sapwood. From the entrance hole, two tunnels, about 5 cm long combined, are excavated in the inner bark perpendicular to the wood grain. Eggs are laid in niches along these tunnels. As larvae hatch they begin tunneling in the inner bark (phloem) at right angles to the adult gallery, i.e., with the wood grain. Larval tunnels are up to 2.5 cm long for P. pubipennis and 1–2 cm long for P. agrifoliae. At maturity, the larvae tunnel to just below the bark surface and pupate at the end of the tunnel. Adults emerge and chew through the bark, leaving behind small exit holes (“shotholes”). Depending on the location, there may be two or more generations per year. Generations overlap, so adult beetles are always present during the growing season. Larvae and adults overwinter under bark.”

The beetles are said to attack weakened, dying and dead trees, as well as freshly cut oak firewood. Healthy oaks are not usually harmed by oak bark beetle attack. But there is a BIG CATCH here: the beetle carries a fungus with it. The western oak bark beetle is also the beetle commonly associated with  the sudden oak death pathogen, Phytophthora ramorum.

The fungus that the western oak bark beetle is said to carry, and cause foamy bark canker, is a type of Geosmithia, a group closely related to Penicillium. Geosmithia are known to be associated with bark beetles (source).

Extensive surveys and laboratory research has since revealed more than a dozen new species of Geosmithia in the western United States. The species causing foamy bark canker is now identified as one of these new species, tentatively called “Geosmithia species 41”.  This identification was done by Dr. Miroslav Kolařík, of the Academy of Sciences of the Czech Republic.

The fungal growth appears to girdle the plant, causing branch dieback and tree death (source). Additionally, it appears the beetle is necessary for the transmission of the fungus.

Since the beetles prefer weakened and drought-stressed trees, your best defense is probably keeping your live oaks healthy.

Watering oaks is the reasonable solution, but you must be careful to not over-water.  This is excerpted from Bill Tietje‘s article,  Native oaks stressed by drought may recover. “A deep watering followed by soil drying for a month or two should not harm the tree. In fact, a deep watering may be the best recommendation for invigorating your thirsty oak tree, thus providing some insurance that the tree will survive this current drought.”   I encourage you to read the whole article; it is short and to the point.

FIRST SET OF IMAGES of the foamy bark canker infected trees, in the Greenhorn Creek area: 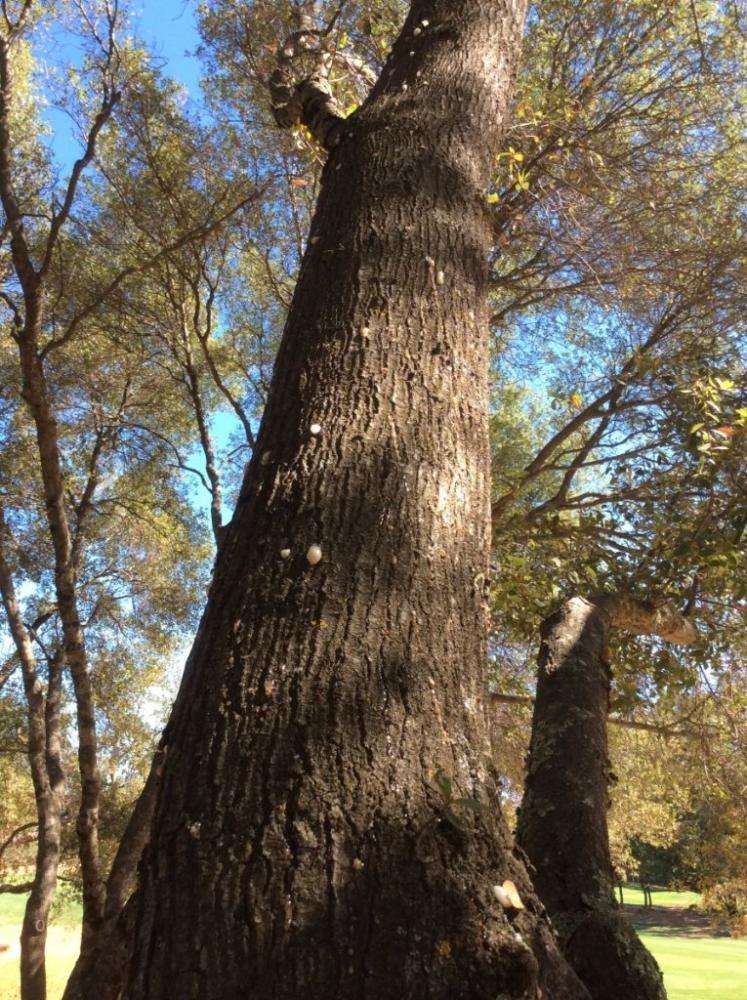 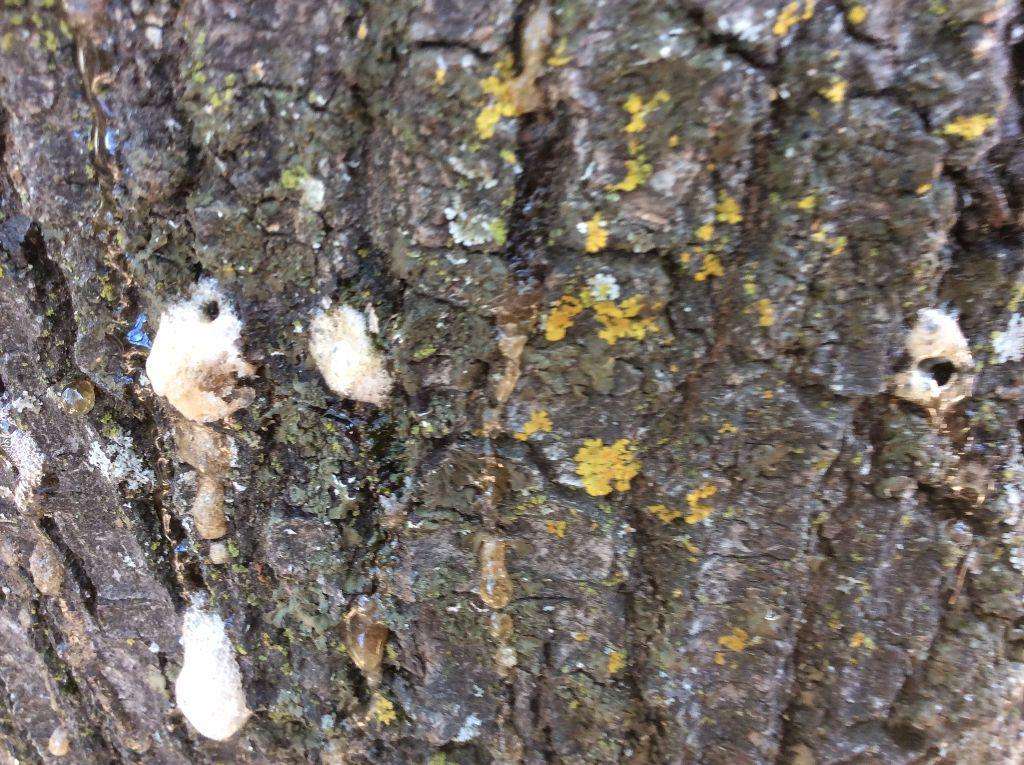 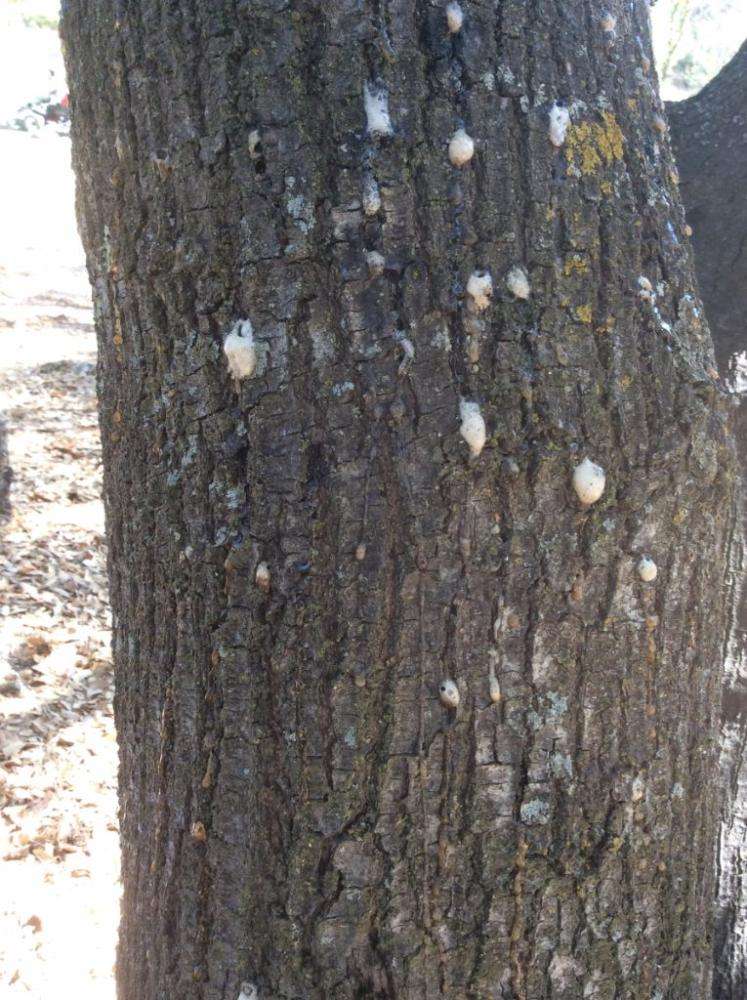 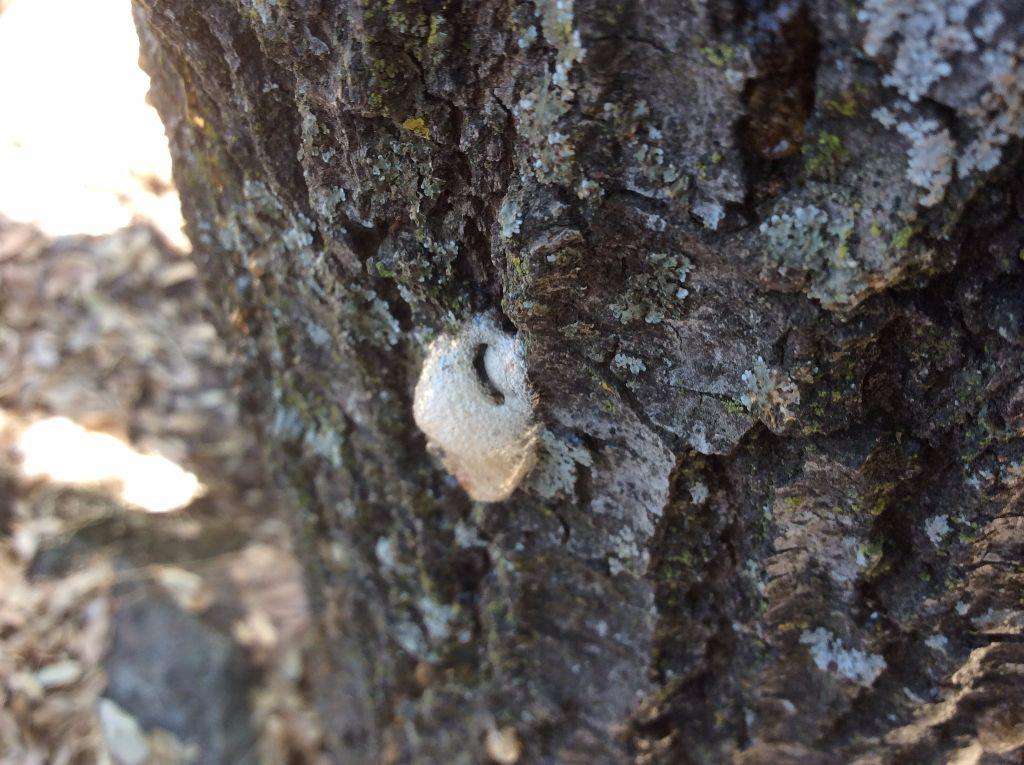 On 28 September 2016, Paul Cooper and I met with Scott Oneto of UC Cooperative Extension, along with Allan Ramorini, Assistant General Manager of Greenhorn Creek. Scott Oneto has been working on the El Dorado County outbreak of foamy bark canker, and wanted to examine this possible find. Scott took samples for laboratory analysis, including Akif Eskalen’s lab at UC Riverside. Scott estimates results should be back within two weeks. His impression is that this might well be foamy bark canker, but the lab results will confirm this or not.

It was clear to Paul and the homeowner that the infestation has gotten much worse in the last few days, the number of foamy holes having increased greatly. We also found two more trees, about 75 feet from the initial cluster of trees, along the edge of the Greenhorn Creek Nature Easement Area.

Scott was having trouble finding holes that showed the characteristic horizontal tunnels made by western oak bark borers. He finally found a good sample, leading him to believe that the infestation on these trees is very new; that is, the beetles have just recently attacked. And that fits with the observations of the homeowner, and the rapid increase in the number of foamy holes on the initial trees.

Note: On 18 October 2016, Scott Oneto told us that the Escalen Lab results were back and that the disease was indeed foamy bark canker.

A Second Location within Greenhorn Creek: A Large Dying Live Oak Infested Prior to the Original Report

These photos show a large, dying live oak, down the street from the originally reported trees. Paul Cooper spotted this dying live oak tree, and returned on Sunday, 24 September 2016, to investigate it further. He found that this tree also showed signs of foamy bark canker. This nearly dead interior live oak is fully Paul Cooper’s discovery, and he did this investigation on his own time. Kudos to Paul for finding it!!

Scott Oneto sampled this tree as well, on his visit on 28 September 2016. Lab results, from the UC pathologist’s lab in Riverside, confirmed this tree also has foamy bark canker.

What this tells us is that the beetle infestation that Paul originally reported was not the initial spot. This tree was infested prior. 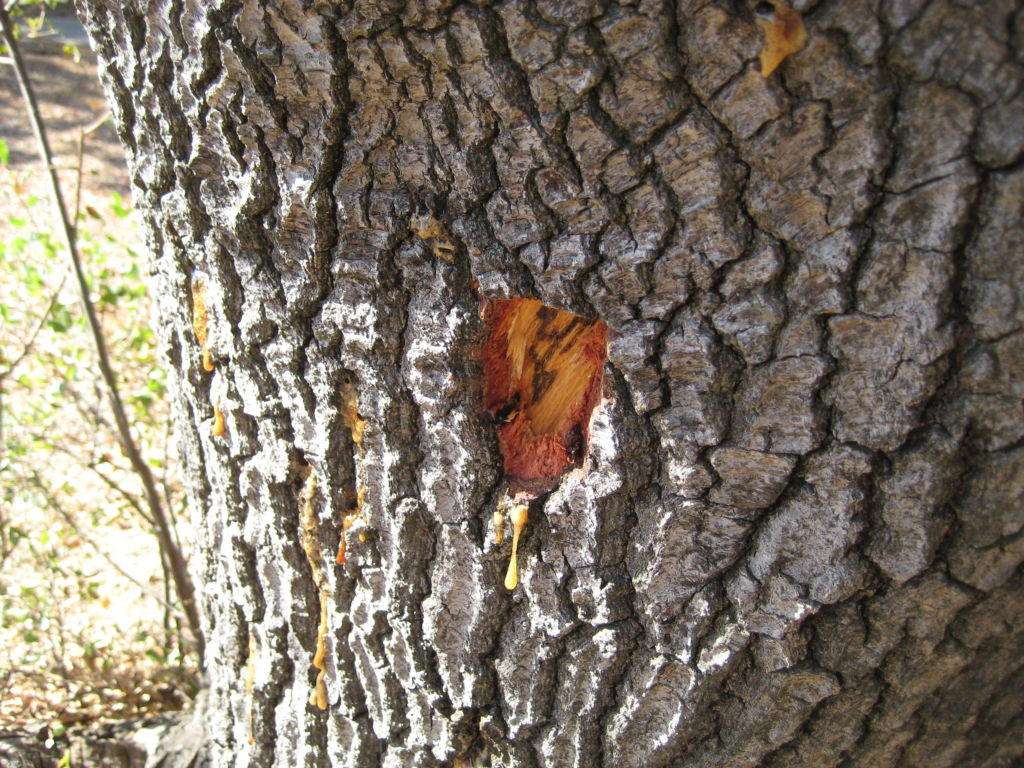 Inside the dying live oak.

Video of the Infestation from 28 September 2016

7 October 2016:  We start the treatment for Foamy Bark Canker

With the approval of the property owner and Greenhorn Creek, using the Arborjet system, we injected the infected interior live oaks with the insecticide emamectin benzoate, and the fungicide Propizol (propiconazole). We’d consulted with Dawn Fluharty, Arborjet’s Regional Technical Director for our area, who told us that Emamectin and Propizol were used in a coastal area, with excellent results. The idea is that the emamectin would kill the beetle, which vectors the disease, and the fungicide would kill the fungus within the oaks, and stop it from killing the tree.

A search of Google Scholar comes up with no published research on the treatment of foamy bark canker, so this report of our injections may be valuable to others. Leaving untreated, control trees, is a standard experimental procedure, but our objective is to completely stop the spread of the foamy bark canker disease in the Greenhorn Creek area, at least for the now, and we do not want to leave any trees infested, as the disease will likely spread rapidly throughout the area. We still do not know where this infestation came from, or whether it is more widespread.

Ryder Richards, our primary tree injector, did the injections. We used maximum label rates for each material. Ryder injected about every five inches of truck circumference, and used the maximum dilution rates. We will be watching to see how the disease progresses.

The changing look of the foam.

We noticed that the foam around the beetle holes was not as foamy as on 22 September 2016. These photos, taken 15 days later, on 7 October 2016, are noticeably less foamy. In many cases the foam has converted to a thick, not foamy resin, or has glazed over and shrunk some.

Video of the Infestation 7 October 2016, showing changes in appearance of the foam.