Erik Brians found a fungal-type growth under some garden plants in Sonora. He brought a sample back.

I removed one of the tubes, and cut it open, as you can see in a series of images below. It was tough and fibrous.

I passed the photos along to Dr. David William Fischer, Mycologist, at American Mushrooms®. He believes it is a type of bird’s nest mushroom, but long dead. You can see photos of living specimens here. Thanks Dr. Fischer! 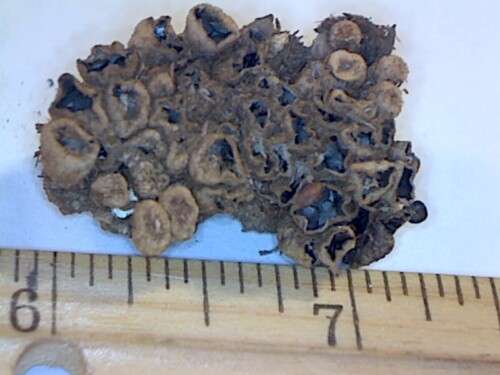 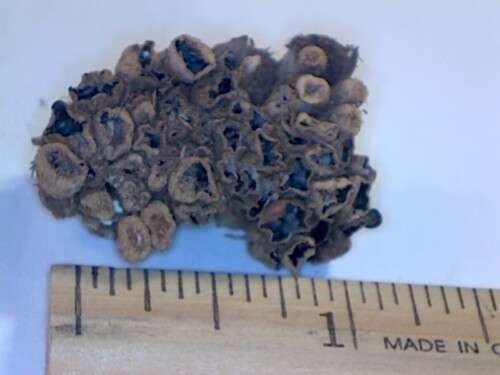 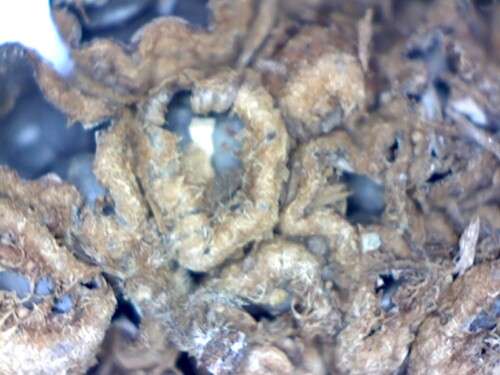 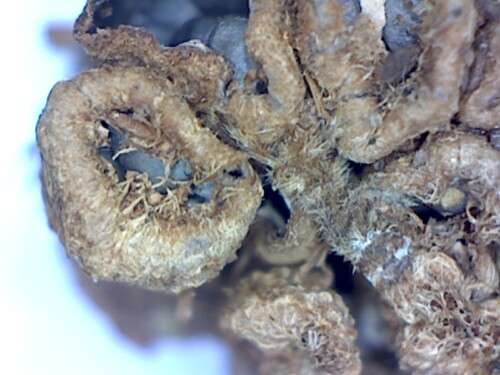 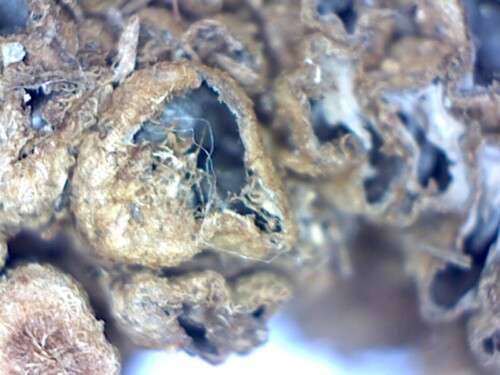 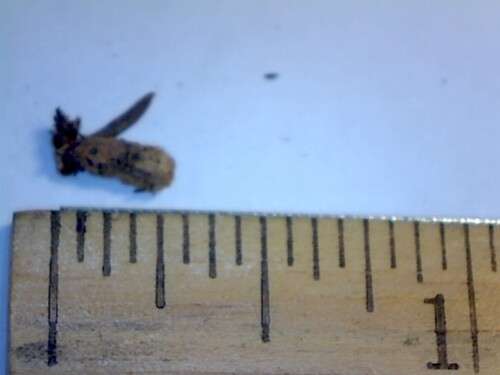 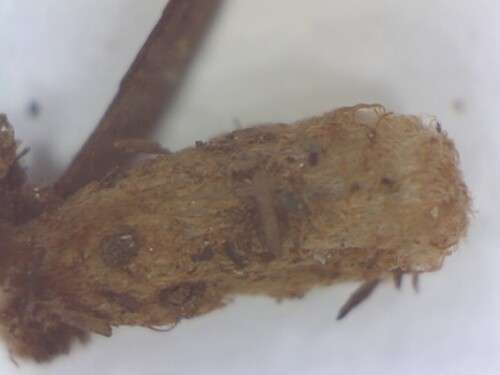 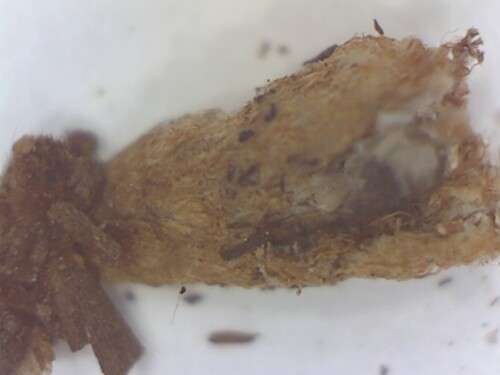 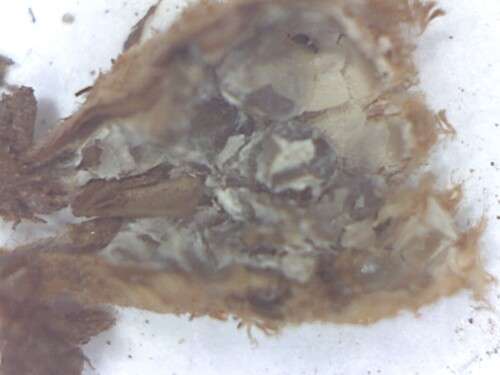 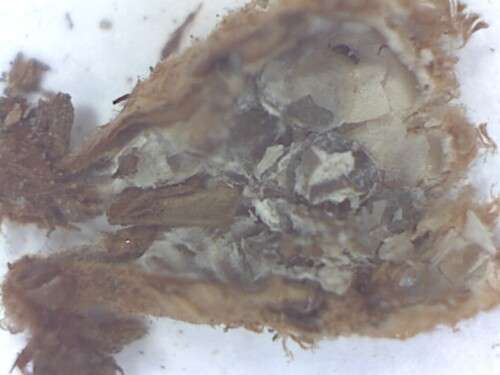 Alex Stewart, while doing a wood-destroying organism report, noticed the roof beam was badly rotted. The beam had a lot of small dead insects in it.

These ants were collected on a manzanita in Pine Mountain Lake, Groveland, California by Ryder Richards. 12 August 2020.

The ants are Pseudomyrmex apache, identified by Dr. Philip Ward.  He states “an elegant arboreal ant that belongs to a predominantly Neotropical genus. One of my favorites.”  Indeed, this ant is special.  (and they never invade homes)

Dr. Ward has published a number of papers on this family of ants. Here are just a few, of many:

The ant subfamily Pseudomyrmecinae (Hymenoptera: Formicidae): generic revision and relationship to other formicids

There is no common name for this particular species, but members of the subfamily Pseudomyrmecinaeenus are often called big-eye arboreal ants, Dr Philip Ward tells me. 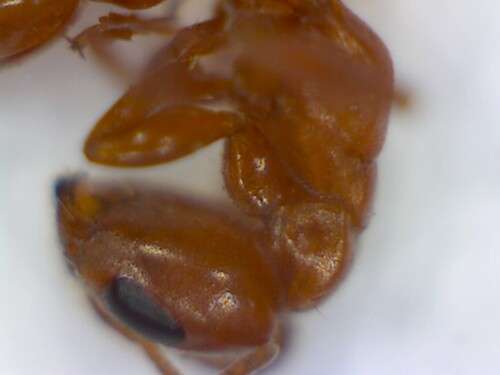 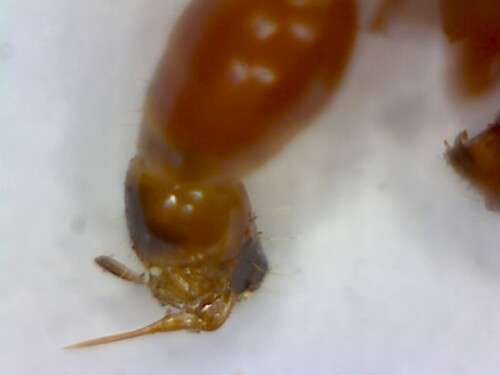 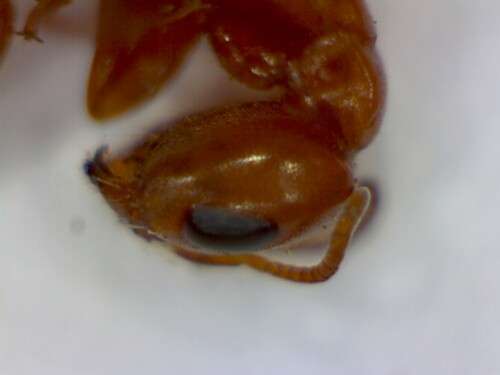 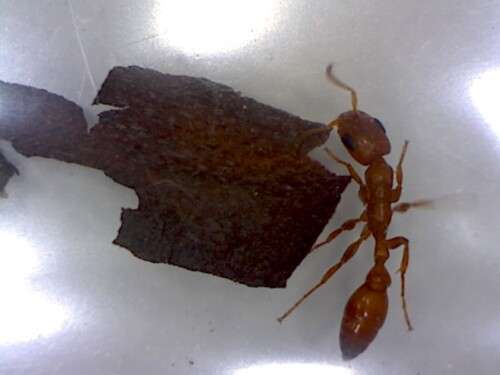 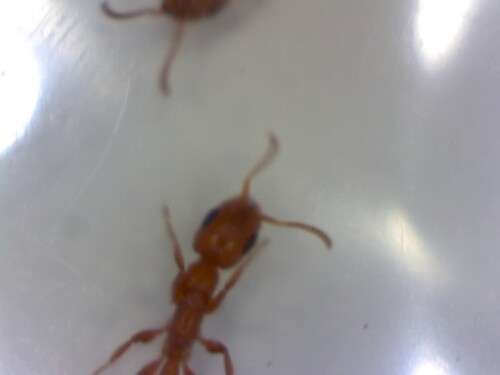 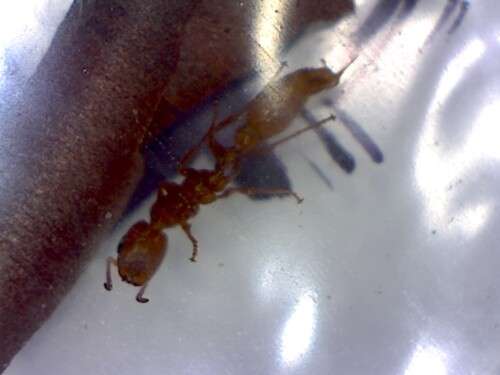 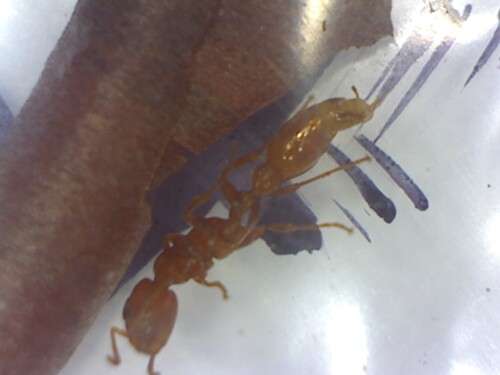 Ryder Richards brought in two glueboards that had a total of six adult cockroaches, three females and three males, on August 4, 2020, from a home in Valley Springs.

These specimens represent the first confirmed sightings, to my knowledge, of the existence of Turkestan cockroaches in Calaveras County, and maybe this part of the state. I have recently, in the last two weeks, seen some specimens that the staff has brought in from parts of Tuolumne County that were very similar, and strongly suggestive of Turkestan roaches, but this sample leaves no doubt.

The Turkestan roach was first reported in the US at the Sharpe Army Depot, near Stockton, in 1978. But we have never seen this roach here, in the foothills, until now.

These specimens came from a house in Valley Springs, Calaveras County, California. These glueboards captured the roaches inside the house, in a bedroom and in the closet of the same bedroom. The roach is seen as primarily an outside pest, but that is clearly not their only choice of habitat.

Note. It might be that our mild winter, with almost no freezing days, have allowed these cockroaches to rapidly expand their population up here in the foothills.

8/17/2020 Update. We found Turkestan roaches in another home in Valley Springs, on Hartvickson.

I spoke to the homeowner. They had a mouse problem and had put out these glueboards to catch the mice. One did catch a mouse, as you can see hair on one of the boards. She said her dog ate the mouse off the glueboard. (I thought that was interesting.) She said that she’d seen one roach in her garage and had stepped on it. She spoke to a neighbor who told her that they, too, had seen roaches in their garage. She saw these roaches on her glueboards on Sunday and then called us on Monday. She started a pest control service, today, Tuesday.

76 October 2020 More Turkestan roaches, off Hartvickson: These nymphs were captured on a glueboard that was under a sink. There were adults and additional nymphs on the outside at this location, harboring under some potted plants. 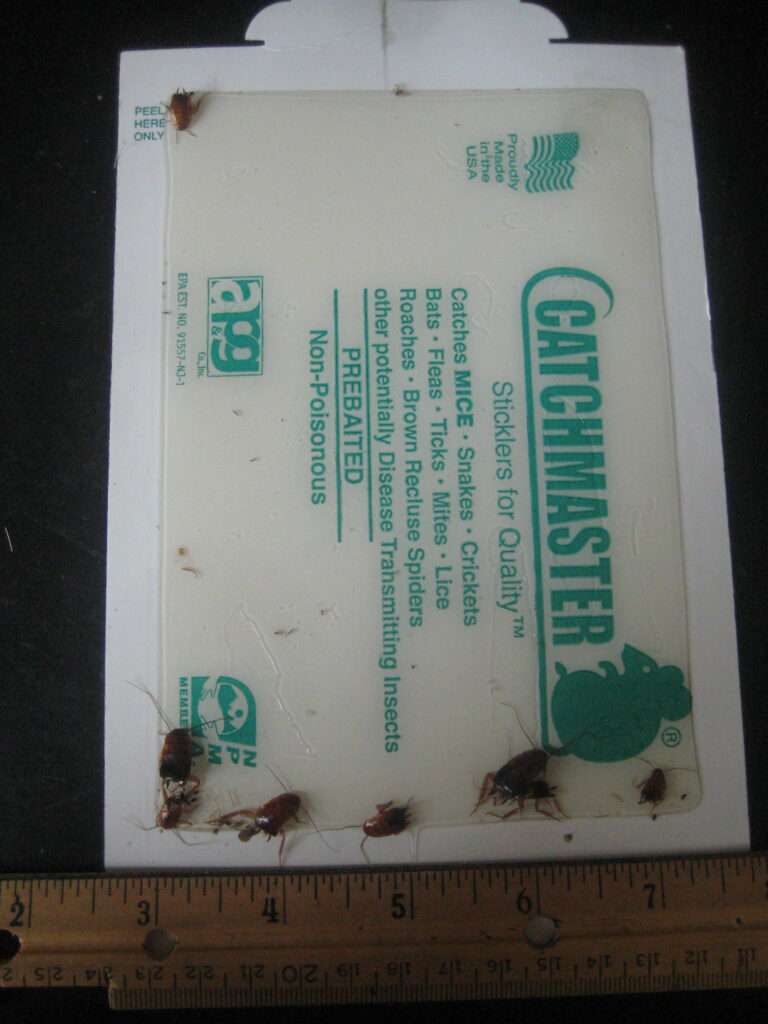 Turkestan roach nymphs collected under a kitchen cabinet, and it appears they entered directly from outside. 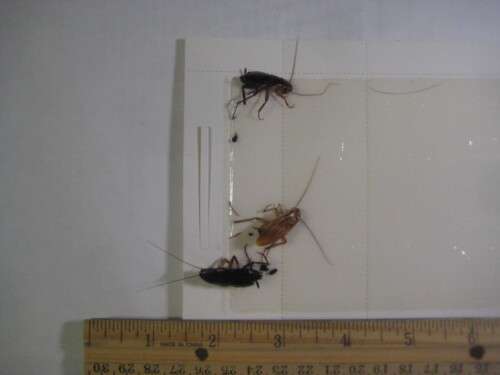 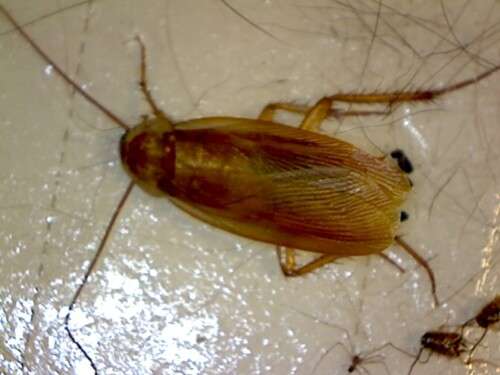 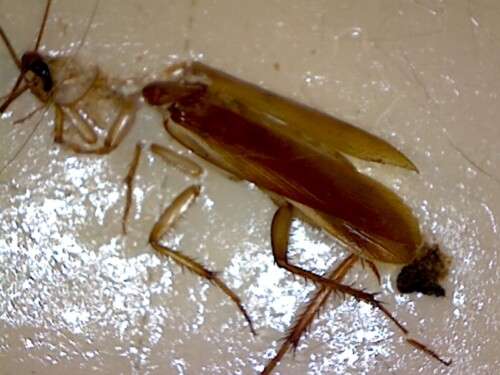 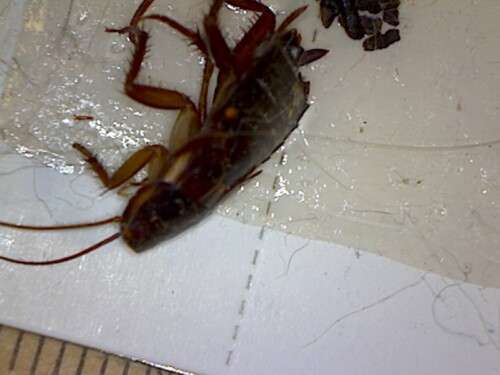 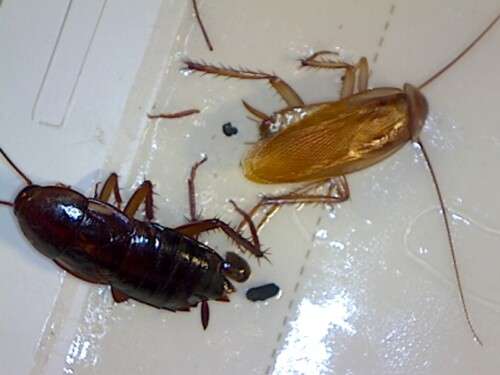 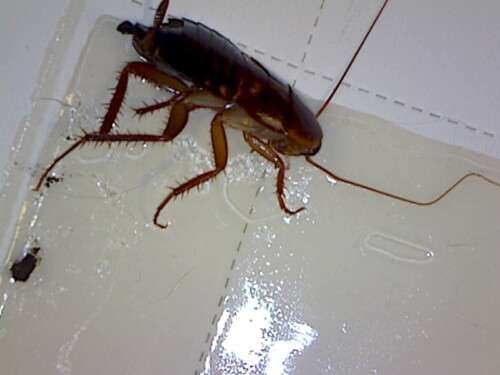 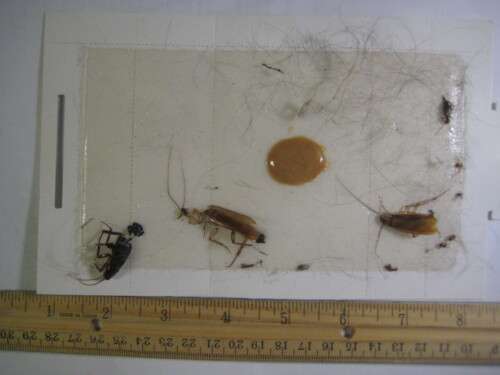